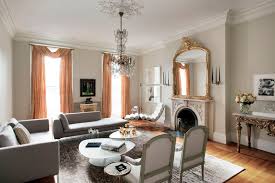 If you would like to add a touch of elegance to your home without going broke, consider putting up a ceiling medallion. A decorative disk centered overhead can turn a plain expanse of drywall into an architectural focal point. And luckily, what was once made from heavy, fragile plaster is now available in molded polyurethane—lightweight, more forgiving, and much easier on the wallet. Afterward, be sure that you install a chandelier that matches with the aesthetic and style of the medallion.

The right ceiling medallion is as much about size as it is about style. After you’ve picked out a piece that won’t look too ornate or too simple next to your room’s other moldings, or the light fixture that will hang from it, buy it in a size that is in proportion to the room. A good rule of thumb is to divide the square footage of your room by 7 to get a rough diameter for your medallion.

But there are other factors to take into account. A medallion should be about the same diam 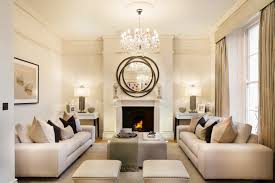 eter as the light fixture that will hang under it, but it can be smaller than a fan. A room with high ceilings can support a larger medallion because it will look well proportioned from farther away. Test different sizes by taping cardboard cutouts to your ceiling and standing back to see how each looks.

Most medallions on the market are polyurethane foam, even those labeled as plaster. You have to read the fine print to discover that they are not, in fact, real plaster. Foam medallions go up quickly and simply, with adhesive caulk and some finish screws. But beware: If you do have a real plaster medallion, this installation will not work because the plaster is too heavy for the adhesive caulk.

Traditionally, medallions pair with a chandelier. Their original purpose was to protect the ceiling from candle burns. To install one with a light fixture, the medallion must have a hole in the middle to allow access to the electrical wiring in the ceiling. The hole should be large enough to let you get at the entire junction box but small enough that the decorative plate, or 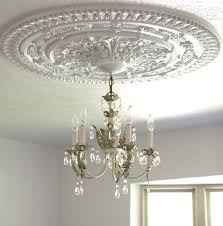 canopy, of the light fixture will hide it. Some medallions come with the hole, but if yours doesn’t already have one you can cut one with a drywall saw.

Clean the ceiling around the fixture location to remove dust, dirt, and debris. If necessary, scrape away chipped paint or caulk from the old fixture. Always treat electrical wires as if they are live, and keep the ends protected with wire nuts as you work.

If your medallion does not already have a center hole, or if the hole is not big enough to allow access to the junction box in the ceiling, cut a new one. Center the fixture’s decorative cover plate, or canopy, on the face of the medallion. Lightly draw four reference marks around the edge of the canopy. 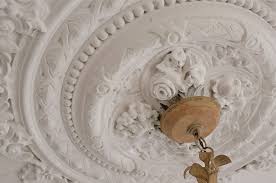 r the ceiling. Using a drill, drill a hole inside the circle. Insert the blade of a drywall saw into the hole and carefully cut along the marked circle. Then take a piece of medium-grit sandpaper, and smooth the inside edge of the circular cutout.

Hold the medallion in place so that it’s centered over the electrical box. Be sure that you can access the wires and the screw holes for the box’s hanging hardware through the hole. Enlarge the hole with sandpaper if necessary.

Check that the threaded bolt is long enough to reach from the junction box to the fixture with t
he medallion in place. Temporarily screw it into the mounting bar. Then hold the medallion against the ceiling while screwing the fixture’s canopy to the nipple, making sure you can tighten it on securely. Remove the medallion and paint it to match the ceiling or the trim in the room. Let it dry. 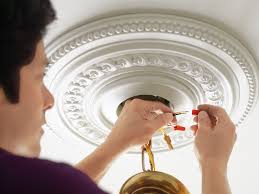 Using a drill, drive two trim-head screws through the medallion and into the ceiling to hold it in place while the adhesive sets. For large medallions, use more screws. Drive the screws in a discreet location in the medallion’s pattern, and let them sink a little below the surface to hide them. Remove the canopy.